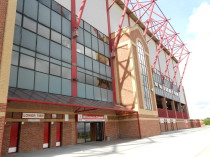 Gateway is God's Church, a church-planting movement in Barnsley which launched on Easter Sunday 2011.

How it happened was like this.  Pastor Mark and his wife Mary Sue had a strong calling to serve in Barnsley long-term.  Mark served as a Methodist Minister in the Barnsley Circuit (2006-2011).  When his 5 year appointment expired and was therefore expected to be posted to another Methodist Circuit in the UK, the strong calling to Barnsley remained.  This was combined with a long-standing passion to begin a new church.

Therefore, a Core Team led by Mark, began to meet for several months for worship, especially prayer, and looking into God's Word, the Bible, as well as mutual support.  Without the Core Team, whom God brought together, Gateway would not have happened.  On 16th January 2011, Mark shared a vision which outlined the thoughts for a new church.  Together, the Core Team agreed to launch 4 months later and to call the church 'Gateway'.  A venue was suggested by the chaplain of Barnsley Football Club: "Come to Oakwell Stadium."  Funnily enough, Barnsley Football Club was started by a Church minister, the Rev Preedy over 125 years ago! 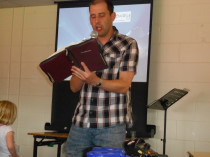 Gateway became established at Oakwell, meeting every Sunday, appointing a Leadership Team, registering as a Charity and a Company Ltd.  Over 100 people turned up at the official launch on Easter Sunday.  On Sunday 11 September 2011, Pastor Mark and his wife, along with the Leadership Team were formally commissioned by other local church leaders. This included ministers from the Baptist Church, Church of England, Independent, Methodist and Salvation Army denominations.  This was significant for Gateway - to be recognised by other local churches - and symbolically declaring we all need each other to serve in partnership to reach the many with the Good News of Jesus.

Much has happened since, including the launch in June 2012 of Barnsley's first CAP centre with the commissioning of the CAP manager, Jonathan Tweedle.  In September 2012 Gateway moved to Mottram Hall, which again is a miraculous free provision by God.  Then in February 2013, Gateway launched the town centre's first Foodbank, feeding dozens of people in crisis every Thursday.  This was in the same month as the first of the rolling Community Engagement Programme. 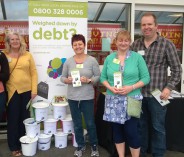 Gateway is a committed member of the Evangelical Alliance, with a major role in Christian partnerships across the town.  This includes Street Pastors, alongside Gateway's own ministries and projects serving the people of Barnsley.

The Church is growing with new faces and new Christians. Mottram Hall quickly became full of these new people, therefore on Sunday 13th October 2013 - after much prayer and discussion - Gateway launched its 2nd congregation.  They meet at the Outreach Centre in New Lodge, Barnsley. In October 2015, Gateway at New Lodge launched its own Food/Clothes Bank for people in crisis within the local community.

Gateway ministers to a lot of people with addictions.  Therefore, God opened the door, for Gateway to expand its CAP ministry, launching CAP Release in November 2014, which is now called Fresh Start.  This is a support group for addicts.  2015 was another significant year, with the launch of the Gateway Bible Academy in March.

On 1st May 2018 Gateway appointed a second Pastor, Alex Botos, to have oversight of the Mottram Hall (MH) congregation, as well as the Romanian congregation (who meet on Sunday mornings at MH).  In January 2019, Mottram Hall underwent a major refurbishment, with new doors, toilets, ceiling and lighting, carpet, rewiring, decor and much more.  During this period, the two MH congregations met at Honeywell Community Centre, a 5 minute walk from MH.  On Sunday 24th March, Mottram Hall reopened with a full house - praising God for His provison (the £55k scheme had been raised through funding from charities and organisations).

On 28th May 2019, Gateway had a united service at the YMCA, to officially recognise and welcome the Romanian gathering as a 3rd Gateway church. On Sunday 5th January 2020, Gateway launched, by God's grace, a 4th church (currently still a 'plant') in Lundwood - new church, new decade!

On the first Sunday of Covid-19 lockdown, when church buldings were closed, Gateway launched a new internet Livestream ministry (22nd March 2020).  Since then a Livestream has been presented every Sunday live from either Mottram Hall (the main studio) or The Outreach Centre.

We believe in the declaration of Jesus Christ who said, "I will build my church".  Do check out this website to get a feel of the life of Gateway Church.  God has been at work, and in this short history of 10 years since Gateway launched, many amazing stories could be told - but that's for another time.  Praise God, because it is His Church.